Disney’s BEAUTY AND THE BEAST
A Main Stage Production

SHOW OVERVIEW
Step into the enchanted world of Broadway’s classic, Disney’s Beauty and the Beast, an international sensation that has been produced in 37 countries worldwide. Based on the Academy Award-winning animated feature, the stage version includes all of the wonderful songs written by Alan Menken and the late Howard Ashman, along with new songs by Mr. Menken and Tim Rice. The original Broadway production ran for over thirteen years and was nominated for nine Tony Awards, including Best Musical.

The classic story tells of Belle, a young woman in a provincial town, and the Beast, who is really a young prince trapped under the spell of an enchantress. If the Beast can learn to love and be loved, the curse will end and he will be transformed into his former self. But time is running out. If the Beast does not learn his lesson soon, he and his household will be doomed for all eternity.

This “tale as old as time” is filled with spectacular costume and set opportunities or, even more simply staged, Disney’s Beauty and the Beast offers a great opportunity to bring your entire community together for family theatre at its best.

DISNEY’S BEAUTY AND THE BEAST
Is presented through special arrangement with Music Theatre International (MTI).
All authorized performance materials are also supplied by MTI.
www.mtishows.com 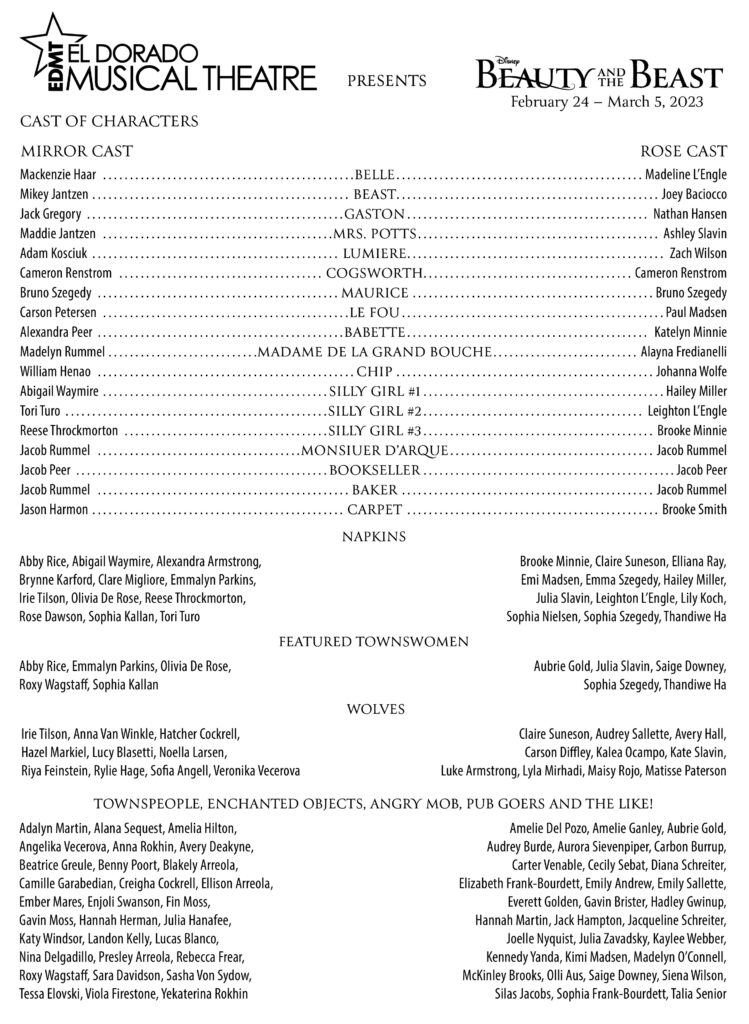 REGISTRATION
Online registration begins Tuesday, November 1st, at 8:00pm on this webpage and closes when full or on Wednesday, November 9th at 11:59pm whichever comes first.  (If the cast is full you may choose to be placed on a waiting list.)  Everyone registered will be in the show.  Auditions are to determine who will perform specific roles.

LEARN THE AUDITION DANCE
Friday, November 4th, at 4:00pm at EDMT’s Rehearsal Facility.  A video link of the audition dance will be emailed to all registrants for those who are unable to attend in-person or who want to use it to practice.

AUDITIONS
Monday, November 14th, starting at 4:00pm at EDMT’s Rehearsal Facility.  When you arrive you will be measured for costumes and have a photo taken for the program.

CALLBACKS
Wednesday, November 16th, starting at 4:00pm at EDMT’s Rehearsal Facility.  Those called back will be asked to read lines from the script and sing the song(s) they were given at the “Callback Table” at auditions.  They should also be prepared to dance.

REHEARSALS
There is a lead read-through on Monday, November 28th, 4:00pm-6:15pm at EDMT; new cast members or those who have only been in a training show will have a new performer orientation from 4:00-5:00pm.  The first rehearsal will be on Tuesday, November 29th.  Lead rehearsals are on Mondays from 4:00-6:15pm (though all performers are subject to be called on a Monday, so read the weekly newsletter for the call list); and all cast member rehearsals are on Tuesdays and Thursdays from 4:00-6:30pm

Review the calendar closely.  Mandatory rehearsals begin on Monday, February 13th and the show runs from February 24th through March 5th at the Harris Center in Folsom.

NEW PARENT MEETING
Parents of cast members NEW to EDMT or cast members who have only done an EDMT training show must attend the NEW PARENT MEETING on Monday, November 28th from 4:00-5:00pm, where you will receive important information critical to the success of your cast member and show.  This is during the time where your new performer will be called to a new performer orientation.  Failure to attend this meeting will result in an absence that will count against the three absences allowed per child during the entire rehearsal period.

ALL PARENT MEETING
Parents of all cast members must attend the ALL PARENT MEETING on Thursday, December 8th from 5:45-6:30pm, where you will receive important information and needs specific to this show.  Failure to attend this meeting will result in an absence that will count against the three absences allowed per child during the entire rehearsal period.

Because of this, each family is required to complete at least 20 volunteer hours for this show.  If your family does not complete 20 volunteer hours, a $200 fee will be charged to your credit card on file.  Information regarding volunteer positions will be sent in the newsletter.

The deadline for applications is October 25th at 5:00pm. Applications received after the deadline will not be considered. Recipients of scholarships will be notified by email no later than 5:00pm on Friday, October 28th. Click HERE to download the scholarship application.

ADDITIONAL INFORMATION
For any additional questions or information about Disney’s BEAUTY AND THE BEAST, please contact Producer, Chris Hobbs, at [email protected] or call the EDMT office at (916) 941-7464.