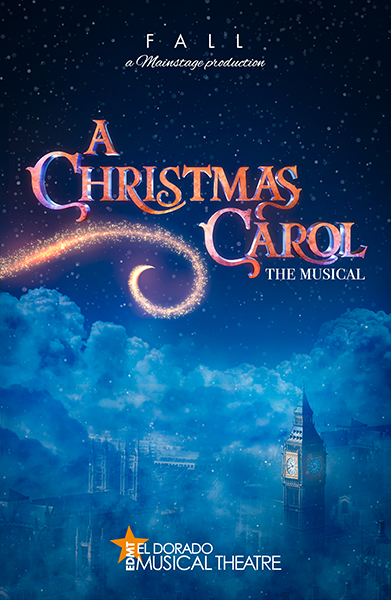 A CHRISTMAS CAROL, The Musical
A Main Stage Production

Ebenezer Scrooge is a prosperous curmudgeon who believes that personal wealth is far more valuable than the happiness and comfort of others.  With an infuriated “Bah! Humbug!” Scrooge summates his feelings of Christmas tidings and charitable giving, but he’s forced to face his selfish ways when three ghosts on Christmas Eve lead him through his Past, Present and Future.  Thanks to their guidance, Scrooge recognizes his faults and greets Christmas morning with a cheerful “Happy Christmas” before spending the day reconnecting and sharing love with those that mean the most to him.

A Christmas Carol is a spectacular adaptation of Charles Dickens’ most well-known story.  Proving its staying power with a decade-long run at the Theatre at Madison Square Garden, A Christmas Carol, is an ideal choice for any theatre hoping to create a holiday tradition.

A CHRISTMAS CAROL
Is presented through special arrangement with Music Theatre International (MTI).
All authorized performance materials are also supplied by MTI.
www.mtishows.com 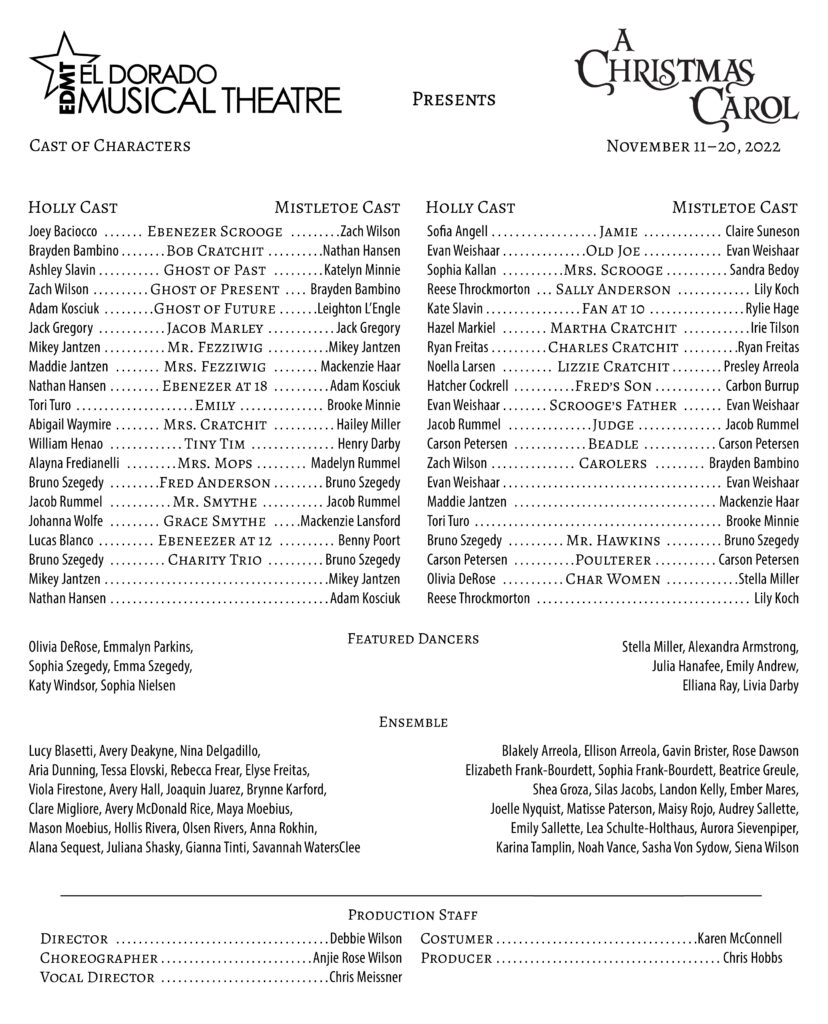 AUDITION WORKSHOP
Wednesday, August 10th, EDMT Founder and Artistic Director, Debbie Wilson, is teaching a workshop ideal for any performer between 6 years old through 22 years old who wants to audition for EDMT’s production of A Christmas Carol.

Congratulations!  You’ve earned a callback for a specific part in the show.  Now what do you do?  This two-hour workhop teaches you the steps to take so you’ll be ready.

REGISTRATION
Online registration begins Tuesday, August 9th, at 8:00pm on this webpage and closes when full or on Wednesday, August 17th at 11:59pm whichever comes first.  (If the cast is full you may choose to be placed on a waiting list.)  Everyone registered will be in the show.  Auditions are to determine who will perform specific roles.

LEARN THE AUDITION DANCE
Tuesday, August 16th, at 4:00pm at EDMT’s Rehearsal Facility.  A video link of the audition dance will be emailed to all registrants for those who are unable to attend in-person or who want to use it to practice.

AUDITIONS
Monday, August 22nd, starting at 4:00pm at EDMT’s Rehearsal Facility.  When you arrive you will be measured for costumes and have a photo taken for the program.

CALLBACKS
Thursday, August 25th, starting at 4:00pm at EDMT’s Rehearsal Facility.  Those called back will be asked to read lines from the script and sing the song(s) they were given at the “Callback Table” at auditions.  They should also be prepared to dance.

REHEARSALS
Rehearsals begin on Monday, August 29th, 4:00pm-6:15pm at EDMT; this will be a read-through with leads; new cast members or those who have only been in a training show will have a new performer orientation from 4:00-5:00pm.  The first rehearsal for the entire cast will be on Tuesday, August 30th, 4:00-6:30pm.  Lead rehearsals are on Mondays from 4:00-6:15pm, and all cast member rehearsals are on Tuesdays and Thursdays from 4:00-6:30pm

Review the calendar closely.  Mandatory rehearsals begin on Sunday, October 30th (no rehearsal on October 31st) and the show runs from November 11th through 20th at the Harris Center in Folsom.

NEW PARENT MEETING
Parents of cast members NEW to EDMT or cast members who have only done an EDMT training show must attend the NEW PARENT MEETING on Monday, August 29th from 4:00-5:00pm, where you will receive important information critical to the success of your cast member and show.  This is during the time where your new performer will be called to a new performer orientation.  Failure to attend this meeting will result in an absence that will count against the three absences allowed per child during the entire rehearsal period.

ALL PARENT MEETING
Parents of all cast members must attend the ALL PARENT MEETING on Thursday, September 8th from 5:45-6:30pm, where you will receive important information and needs specific to this show.  Failure to attend this meeting will result in an absence that will count against the three absences allowed per child during the entire rehearsal period.

The deadline for applications is August 2nd at 5:00pm. Applications received after the deadline will not be considered. Recipients of scholarships will be notified by email no later than 5:00pm on Friday, August 5th. Click HERE to download the scholarship application.

ADDITIONAL INFORMATION
For any additional questions or information about A Christmas Carol, please contact Producer, Chris Hobbs, at [email protected] or call the EDMT office at (916) 941-7464.